Published May 7 2019 in the journal mBio By Blaine Friedlander. While sifting through the bacterial genome of salmonella, Cornell University food scientists discovered mcr-9, a new stealthy, jumping gene so diabolical and robust that it resists one of the world's few last-resort antibiotics. 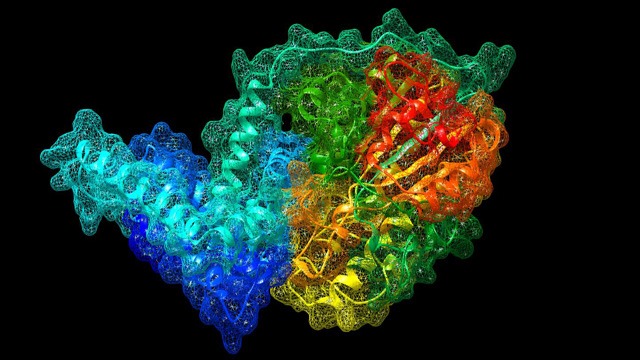 Doctors deploy the antibiotic colistin when all other infection-fighting options are exhausted. But resistance to colistin has emerged around the globe, threatening its efficacy.  "This last-resort antibiotic has been designated a highest-priority antibiotic by the United Nations' World Health Organization, and the mcr-9 gene causes bacteria to resist it," said Martin Wiedmann, food safety professor and senior author on the study, "In treatments, if colistin does not work, it literally could mean death for patients. If colistin resistance spreads, a lot of people will die."

Co-lead author Laura Carroll, a computational biologist and Cornell doctoral candidate, found mcr-9 in the genome of a strain of foodborne pathogen salmonella.  Mcr-9 is the latest in this new series of "mobilized colistin-resistance" genes - originally discovered in 2015. The National Center for Biotechnology Information, part of the National Institutes of Health, has added details about this new gene to its database. Medical professionals and others can now use this information to identify mcr-9 in bacteria isolated from food products and people.

Details about mcr-9 in national and international databases enable scientists to develop better prevention and treatment, explained Wiedmann. "This improves our ability to get an early warning," he said.  Bacteria isolated from food products can now be tested for mcr-9, and patients can be screened for colistin-resistant bacteria, which possess mcr-9.  "If you go to a hospital and this gene is floating around, that can be trouble. The gene is moveable. It jumps," Wiedmann said. "In a hospital setting, being able to screen a patient for resistance allows doctors and nurses to isolate the patient and maintain biosecurity."

https://www.money.co.uk/guides/revealed-the-life-threatening-bacteria-on...
Revealed: The life threatening bacteria on your cash
Money.co.uk teamed up with the London Metropolitan University to put cash under the microscope and the results are shocking. Here are the facts about how dirty money is. 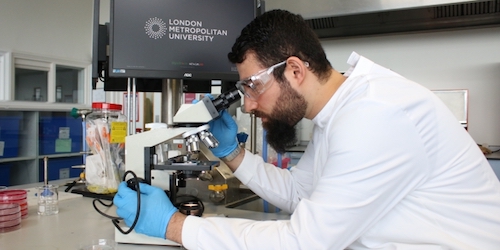 Key findings:Testing your cash
Microbiologists studied the bacteria in a controlled lab environment over a period of 8 weeks.

Money under the microscope
Dr Paul Matewele, Professor of Microbiology at London Met, and his students took 36 samples from a random selection of all denominations of coins and notes. The study revealed cash is incredibly dirty and a breeding ground for bacteria.

19 different bacteria were found across UK coins, polymer £5 and £10 notes and paper £20 and £50 notes.
The results revealed two of the world's most dangerous bacteria were on the money we tested -  life threatening bacteria associated with antibiotic resistant superbugs: Staphylococcus aureus (MRSA) and Enterococcus faecium (VRE). The life-threatening airborne bacteria, Listeria was also found.  It was thought the new polymer notes would be cleaner but even they were growing some life threatening bugs.

“One of the most shocking discoveries was finding so many microorganisms thriving on metal, an element you wouldn't normally expect to see germs surviving on. The bugs have adapted to their environment, resulting in coins becoming a breeding ground for harmful bacteria.  People who have compromised immune systems could be most at risk from handling dirty money - if you're visiting people in hospital who might be vulnerable to infection, you could unknowingly transfer bacteria off your cash which is resistant to antibiotics."

> Skin bacterium learns to shrug off antibiotic of last resort

Microbes that are part of the normal human flora have given rise to drug-resistant strains that are now found in healthcare facilities worldwide.
The bacterium staphylococcus epidermidis has developed resistance to multiple antibiotics, complicating the treatment of people infected with the common microbe.

Staphylococcus epidermidis lives on human skin and is normally harmless to its host. But when the skin is breached, the bacterium can cause infections, particularly among people with medical implants, such as long-term catheters, or prosthetics, such as artificial heart valves.

Benjamin Howden and colleagues at the Peter Doherty Institute for Infection and Immunity in Melbourne, Australia, looked at hundreds of samples of S. epidermidis collected from 96 hospitals and research centres across 24 countries. They found that three bacterial lineages that are resistant to almost all antibiotics have spread around the world during the past few decades.

https://www.independent.co.uk/news/health/horsefly-bite-symptoms-infecti...
13 July 2018   Alex Matthews-King
It is entirely possible in 2018 that you can die of an insect bite, not just in some hot foreign clime, but here in Britain,’ said Antibiotic Research UK chief.  Bloodsucking horseflies are on the rise as Britain swelters under its longest heatwave for 40 years – and charities are warning that their bites can lead to potentially deadly infections.  The increasing temperatures have seen swarms of clegs – or horseflies – in the UK reach Mediterranean levels raising the risk of serious bacterial infections, according to Antibiotic Research UK (ANTRUK).

>The Catch-22 of Mass-Prescribing Antibiotics

10 May 18.   https://www.wired.com/story/the-catch-22-of-mass-prescribing-antibiotics/
The possibility of having to judge the immediate survival of children versus the future survival of victims of resistance highlights that, across societies, antibiotics don’t have equal value. In the industrial West, we’ve moved through antibiotics, taking them for granted and using them up. In the global South, some societies are still waiting to obtain them.

An untreatable form of gonorrhea is spreading across the world and has been detected in the UK. 'This is the first time a case has displayed such high-level resistance to both of these drugs and to most other commonly used antibiotics'. An estimated 78 million people globally are infected with gonorrhea each year. The Neisseria gonorrhoea bacteria is showing high resistance to azithromycin.

2 February 2018   Tom Batchelor    Farmers using powerful antibiotic on healthy chickens to boost weight
Thousands of tonnes of colistin shipped worldwide to be used without controls, investigation finds.
A powerful antibiotic described as a drug of last resort is being used on an industrial scale by farmers around the world, often on healthy animals and in a practice that poses risks to human health.  Colistin is given to chickens and other farm animals to make them gain weight faster and as preemptive protection against disease.  But the antibiotic is also used as a last line of defence in humans whose infections are not responding to other drugs.

14 January 2018  Alex Matthews-King   Surfers harbour antibiotic resistant superbugs, study finds
Surfers are three times more likely to carry drug-resistant E coli bacteria.   Researchers from the University of Exeter said surfers swallow ten times more seawater than swimmers and bacteria from sewage runoff can get into the body, despite coastal cleanliness improvements.   Worryingly, surfers were also much more likely to be carrying bacteria which are able to pass on resistance DNA to other bugs in the body.

13 November 2017    Alex Matthews-King   Superbug warning as bacteria resist strong alcohol hand sanitisers
Alcohol disinfectants have been credited with preventing thousands of MRSA deaths but they are
increasingly ineffective against some superbugs. Scientists have sounded an alarm in the fight against superbugs after finding evidence that bacteria are growing resistant to alcohol hand sanitisers integral to controlling infections. Researchers made the worrying finding while investigating why some species of antibiotic-resistant bacteria in Australian hospitals have become a growing menace despite the widespread use of hand gel disinfectants.

>Warning of a post-antibiotic apocalypse by England’s CMO 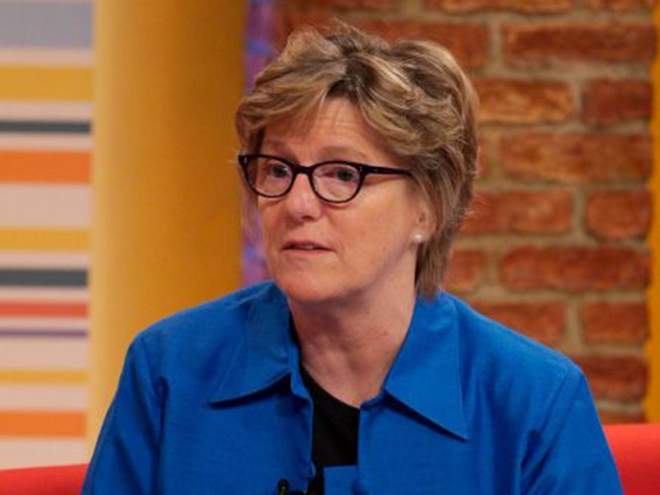 England’s chief medical officer has warned of a “post-antibiotic apocalypse” as she issued a call to action urging global leaders to address the growing threat of antibiotic resistance.  Professor Dame Sally Davies said that if antibiotics lose their effectiveness it will spell “the end of modern medicine”.  Without the drugs used to fight infections, common medical interventions such as caesarean sections, cancer treatments and hip replacements would become incredibly “risky”, she said.  And transplant medicine would be a “thing of the past”, she added.

>Antibiotic-resistant genes are being spread all over the world in animal feed,

30 August 2017  Ian Johnston   Antibiotic-resistance ‘being spread globally in animal feed’
Ten million people could die every year by 2050 if the rise of superbugs is not checked, experts have warned.
Antibiotic-resistant genes are being spread around the world in animal feed, according to new research that adds to fears humanity could lose one of our most important medicines. A Government-commissioned report last year estimated 10 million people a year could die worldwide by 2050 because of the rise of “superbugs”. The threat to human health has been compared to climate change and nuclear war.

Penicillin heralded the dawn of the antibiotic age - due to overuse and misuse we are approaching a post-antibiotic age.