In 2015, the World Health Assembly (WHA) adopted the Global Action Plan on Antimicrobial Resistance (GAP), which included the goal that all Member States would have, by 2017, a national action plan (NAP) aligned with the GAP objectives. By the end of March 2018, 100 countries had prepared a NAP, and a further 67 had plans in progress. NB: Only 5% of AMR Country Plans are adequately funded and monitored.  Source: Wellcome Fdn.

The GAP suggests that basic infection prevention and control is the main priority – as well as the most cost–effective intervention – for tackling AMR in all countries. Ensuring the provision of WASH (Water, Sanitation and Hygiene) is critical, not least in health care settings, where WASH plays a key role in reducing the incidence of resistant infections by ensuring hand washing and cleaning of toilets, surfaces, bedding and medical equipment. 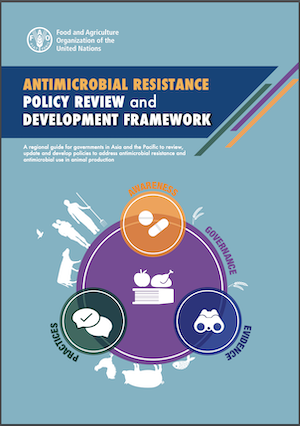 The United Nations General Assembly (UNGA) has recognized AMR as a global priority health issue. It is an unprecedented move, as AMR became just the fourth global health issue that the UNGA formally addressed. The FAO is at the forefront of the campaign to mitigate AMR especially in the food and agriculture sectors. It is leading in assisting member countries in the development of their national action plans and implementing innovative public awareness and surveillance approaches in livestock production, aquaculture and crop farming. One of the key focus areas of the FAO action plan on AMR is strengthening governance related to antimicrobial use and AMR in food and agriculture. The Framework is designed to help countries review their own national policies and provides examples from countries that facilitate effective national response to AMR. 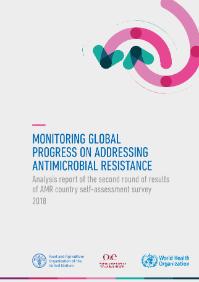 Monitoring Global Progress on Addressing Antimicrobial Resistance: Analysis report of the second round of results of AMR country self-assessment survey 2018,
Published by the Food and Agriculture Organization of the United Nations, the World Organisation for Animal Health and the World Health Organization. The report reflects progress in the human, animal (terrestrial and aquatic), plant, food safety and environmental sectors. 154 countries out of 194 WHO Member States responded to this round of the self-assessment survey – a response rate of 79.4%. It outlines the progress achieved towards the goals of the Global Action Plan.

>Global Action Plan on Antimicrobial Resistance - message from WHO Director-General        18.07.18

Countries are making significant steps in tackling antimicrobial resistance (AMR), but  serious gaps remain and require  urgent action, according to a report released today by the Food and Agriculture Organization of the United Nations (FAO), World Organisation for Animal Health (OIE) and the World Health Organization (WHO).   The report charts progress in 154 countries and reveals  wide discrepancies.

http://www.fao.org/3/a-i6106e.pdf
Supporting the food and agriculture sectors in implementing the Global Action Plan on Antimicrobial Resistance to minimize the impact of antimicrobial resistance (available in French and Spanish)

Report published in October 2017
less than 5% of countries had allocated adequate funding for their AMR strategies.
View report: https://wellcome.ac.uk/sites/default/files/sustaining-global-action-on-antimicrobial-resistance.pdf

Read more:  AURA 2016 Report https://www.safetyandquality.gov.au/wp-content/uploads/2016/06/AURA-2016-Summary-Report.pdf​
NB:  Australia has one of the highest rates of antibiotic use in the world, ranking 8th among 29 countries evaluated by the OECD.

http://www.fao.org/antimicrobial-resistance/en/
14 Nov 2016 - Uploaded by Food and Agriculture Organization of the United Nations
Antibiotic resistance is one of the biggest threats to global health  today. It poses a major challenge to health, food security, & development. It can affect anyone, of any age, in any country. All around the world, bacteria are becoming resistant to the antibiotics used to treat the infections they cause, resulting in longer illnesses & more deaths. At the same time, not enough new antibiotics are being developed to replace older & increasingly ineffective ones.

Without urgent action, the world is headed for a ‘post-antibiotic era’ in which common infections & minor injuries which have been treatable for decades can once again kill, & the benefits of advanced medical treatments such as chemotherapy & major surgery will be lost.

In 2015, the WHA adopted the Global Action Plan on Antimicrobial Resistance (GAP), which included the goal that all Member States would have, by 2017, a National Action Plan (NAP) aligned with the GAP objectives. By the end of March 2018, 100 countries had prepared a NAP, and a further 67 had plans in progress. This 16 page discussion paper, published by the Ad-hoc Interagency Coordination Group (IACG) on AMR, draws on recent work by the tripartite organizations (FAO, OIE and WHO) and others to identify challenges in implementing NAPs and invites discussion on how to address them.

In most countries, the greatest challenge is not writing a NAP but implementing it and demonstrating sustained action.  Five factors in particular make implementing NAPs a challenge for many countries:

For real engagement with and uptake of a NAP, the general public must also understand it and want to implement it.  To raise awareness in the general public, advocate for policy and regulatory change and lead antimicrobial stewardship on the ground will require a coalition development to build consensus among diverse stake holders.

>National action plans on amr - Centre for Science and Environment

Penicillin heralded the dawn of the antibiotic age - due to overuse and misuse we are approaching a post-antibiotic age.