The CombatAMR Special Feature bi-monthly page showcases the work, research or policy developments being undertaken by other organisations, governments, companies, research centres and individuals. Interviews with and profiles of the activities of scientists, politicians, volunteers and activists will extend awareness and support their initiatives.  We are all in this fight together. Let us make a difference for individuals and for society.

>A look back at a year of vaccine announcements

12 January 2019.  Since Access to Medicine Foundation published the Access to Vaccines Index in March 2017, vaccine companies have reported a series of positive developments in their efforts to address immunisation coverage. The Access to Medicine Foundation has reviewed these statements to give a sense of the level of momentum in the vaccines industry to improve access to vaccines. Download the Overview of the companies public announcements.
The overview published today summarises announcements made by the eight companies evaluated in the Access to Vaccines Index. It includes announcements published between 1 April 2017 and 3 January 2018. Out of 18 published announcements, two thirds relate to research and development, with others relating to licensing agreements, procurement matters and vaccine supply.

Vaccine companies report more activity in research and development than in other areas, making nine announcements relating to clinical trials and four about new R&D partnerships that aim to make vaccines more effective or easier to deploy to limited-resource communities. An announcement regarding a technology transfer supports the view that licensing is a feasible and effective way of increasing access to vaccines. More companies can take advantage of licensing as a way of introducing their vaccines in new markets. Three companies announced developments that can help make vaccine supply more reliable, including for pneumonia, influenza and polio vaccines.

20 November 2018.  It evaluates 20 of the world's largest pharmaceutical companies on their actions to improve access to medicine. The Index covers 106 low- and middle-income countries and 77 diseases, conditions and pathogens. The 2018 Index provides a finely detailed picture of these companies’ access-related policies and practices based on an analysis of 69 indicators. Download the Access to Medicine Index 2018.

>Global antibiotics supply is patchy, complex and at risk of collapsing.

https://amrbenchmark.org/         Download the White Paper
31 May 2018. New white paper unpacks systemic causes of antibiotic shortages and calls for global action to rebuild the market   Access to Medicine Foundation warns that antibiotic supply chains are on the brink of collapse, putting basic healthcare at risk, in a new white paper titled “Shortages, stockouts and scarcity: the issues facing the security of antibiotic supply and the role for pharmaceutical companies”. Urgent action is needed to rebuild the antibiotics market. The paper shows how some pharmaceutical companies are responding.

>The Antimicrobial Resistance Benchmark from Access to Medicine Foundation

The goal of the Antimicrobial Resistance Benchmark is to guide and incentivise pharmaceutical companies to fulfil their potential in limiting AMR by:

https://accesstomedicinefoundation.org/media/uploads/downloads/5bc5eddd2d5ef_2017-Access-to-Vaccines-Index.pdf
06 March 2017. The Access to Vaccines Index reveals the first landscape of industry activity to improve immunisation coverage. It finds a high level of diversity in how vaccine companies are improving access to vaccines for people living in poorer countries. This diversity is generally linked to the size of their portfolios and pipelines. Vaccines are one of the most powerful and cost-effective health interventions available. Yet WHO states that an estimated 19.4 million infants worldwide are still missing out on basic vaccines.

“There is a world to be won by increasing access to vaccines,” says Jayasree K. Iyer, Executive Director, Access to Medicine Foundation. “As a global community, we all share the responsibility of ensuring everyone can benefit from immunisation. The companies that develop and manufacture vaccines clearly also have a role to play. This Index has mapped what vaccine companies are doing, and what prompts them to take action – it is a critical step in the effort to make vaccine markets more inclusive.”

"There are real solutions for slowing AMR. By identifying who
is taking action, we can help good ideas to spread."

Jayasree K. Iyer leads the Access to Medicine Foundation as Executive Director. She directs the Foundation’s strategy, its stakeholder dialogues and research programmes. As a spokesperson, she is actively involved in stimulating change within the pharmaceutical industry. 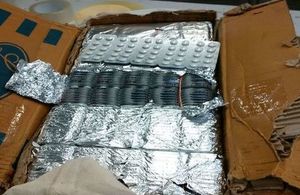 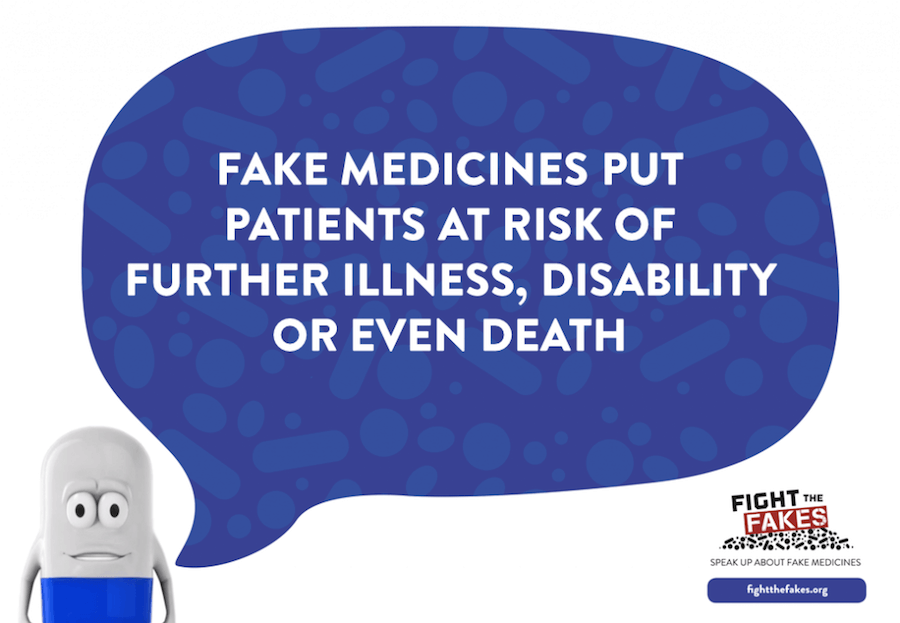 What it means to fall victim to falsified medicines
Partnership for Safe Medicines (PSM) | August 24, 2018

Deaths caused by falsified medicines containing dangerous and illegal substances are on an alarming rise in the United States. Fight the Fakes partner The Partnership for Safe Medicines is making great efforts to tackle this epidemic-like matter. On 7 June 2018, during the 2018 Interchange conference, they joined forces with another Fight the Fakes partner, the National Association of Boards of Pharmacy (NABP) and the National Association of Drug Diversion Investigators (NADDI). Together they formed the Fentanyl Council, a body that raises awareness to the wider public and supports law enforcement to bring justice to those responsible.

Carrie Luther
Carrie Luther shared the story of her son, Tosh, a 29-year-old with a bright future ahead of him, whose life was cut short by a fake pill, pressed into the shape of a legitimate Xanax. Tosh was extremely close to his family, often getting together for dinners and playing games with his mom, dad, siblings, and nieces, who adored him. Those who knew him described him as a genuine person who cared about what they had to say and always offered a smile and a kind word. Tosh had developed hives, which caused insomnia, so Tosh took part of a pill to help him sleep. However, even though the pill looked like a regular prescription medicine, it was a counterfeit that contained a high quantity of the powerful opioid fentanyl. Traffickers in Mexico, Canada and the US are using illegally imported fentanyl and pill presses to create counterfeit medications. Tosh never willingly took a pill made of fentanyl but was deceived by falsified medicines. By paying tribute to Tosh’s life and telling his story, his mother Carrie is saving lives through raising awareness of the dangers of falsified prescription medicines.

Lisa Hicks
Lisa Hicks lost her only son Joe Patterson to fake medicines. Joe was very careful about his health and his physical fitness and was striving to become a personal trainer. Moreover, Joe’s girlfriend was expecting their baby and he was thrilled to become a father. The day Joe tragically passed away, he went to the gym but pulled a muscle during an exercise and asked a friend for a pain reliever. Unbeknownst to him, his friend provided him with what looked like prescription oxycodone, but which in fact was a counterfeit pill that contained a high dose of fentanyl. Joe passed away less than 24 hours after taking the pill from an overdose of fentanyl. While his mother continues to contemplate about what could have been done to stop this from happening, nobody could expect that falsified pills would become so widespread and deadly. To prevent other patients falling victim to this threat, Lisa Hicks continues to speak up against fake meds and raise awareness about her son’s tragedy.

Jennifer Hodge
Jennifer Hodge’s son Robbie struggled with anxiety issues but with time and treatment, he learned to cope with his anxiety better. As a young adult, Robbie helped his mother launch a project that would enable people to pay for needed drug treatment programs. Their non-profit gained momentum, and Jennifer and Robbie continued to work for its success.. Tragically, after a long Thanksgiving holiday weekend, Robbie suffered from an anxiety attack and tried to treat it with Xanax he got from a friend. The pill he took looked like prescription Alprazolam but contained a fatal dose of fentanyl. Having dedicated her efforts to fight drugs, Jennifer Hodge then experienced the loss of her son by drug-laced falsified medication. However, she continues to fight and tells her story to increase awareness about the invisible and dangerous threat of falsified medicines.

These deeply-upsetting stories that the three mothers shared during the 2018 Interchange conference have two things in common: first, the medicines that caused the deaths of their sons were falsified and contained very dangerous substances, disguised in prescription medicines. And second, the three mothers affected by tragedies are speaking up against falsified medicines and are highlighting the dangers to public health. To support them in their efforts, Fight the Fakes wants to amplify their voices to prevent future parents, siblings and people to fall victim to falsified medicines.

The fight against substandard and falsified medical products in Africa was brought to the highest levels last Wednesday, 26 September, at an UN General Assembly High-Level side event in New York. Organized by the Republic of Benin and the Republic of Zambia, as well as the African Union Commission and the World Health Organisation, the event showcased best examples of how to eliminate fake medicines.  Entitled “The fight for quality medicines in Africa – stopping falsified, substandard medicines” the event was an important opportunity to share also guidance for future actions with strong political will.

Fight the Fakes partners Fondation Chirac and the International Federation of Pharmaceutical Manufacturers and Associations (IFPMA) attended the meeting to contribute to a forward-looking discussion about stopping falsified and substandard medicines.