https://www.gov.uk/government/publications/uk-5-year-antimicrobial-resistance-strategy-2013-to-2018.  Published 10 September 2013
Guidance: Sets out actions to slow the development and spread of antimicrobial resistance with a focus on antibiotics.

https://www.cdc.gov/drugresistance/.../national_action_plan_for_combating_antibotic...
The National Action Plan for Combating Antibiotic-resistant Bacteria provides a roadmap to guide the Nation in rising to this challenge . ... While all of these pathogens are dangerous to human health, the National Action Plan focuses on resistance in bacteria that present an urgent or serious threat to public health.

>FRANCE: THE FRENCH APPROACH TO FIGHTING ANTIBIOTIC RESISTANCE: A CONSTANT AND COORDINATED EFFORT SINCE 2000.

http://resistancecontrol.info/2016/government-engagement/the-french-approach-to-fighting-antibiotic-resistance-a-constant-and-coordinated-effort-since-2000/
The French programme against antibiotic resistance has been intensified since 2000. A set of national plans have been developed, both for humans (three plans from 2001 to 2016), and in the veterinary setting from 2012 to 2017. Both plans were initially successful in decreasing antibiotic consumption, and antibiotic resistance for some microorganisms.

https://www.mhlw.go.jp/file/06-Seisakujouhou-10900000-Kenkoukyoku/0000138942.pdf
For the purpose of developing a national action plan on antimicrobial resistance (AMR), the Government of Japan established the Antimicrobial Resistance (AMR) Task Force under the Ministry of Health, Labour and Welfare (MHLW) in cooperation with other ministries in November 2015, and has subsequently conducted expert interviews and other efforts of investigation.

Union Minister of Health and Family Welfare announced the finalization of India’s comprehensive and multi-sectoral National Action Plan at the ‘Inter-Ministerial Consultation on AMR containment’ held at New Delhi. Ministers and representatives of eleven ministries signed “Delhi Declaration”to contain Antimicrobial Resistance (AMR). The Declaration calls for the support of all stakeholders including UN, WHO, FAO and other UN agencies, civil society organizations etc., in developing and implementing the national and state action plans on AMR.

The National Programme for Containment of AMR is under implementation in 12th Five Year Plan with the following objectives:

Establish a laboratory--based surveillance system by strengthening laboratories.
Generate quality data on AMR for pathogens of public health importance.
Generate awareness among healthcare providers and in the community regarding the rational use of antibiotics.
Strengthen infection control guidelines and practices and practices and promote rational use of antibiotics.

NB: “A Roadmap to Tackle the Challenge of Antimicrobial Resistance – Joint meeting of Medical Societies in India” 2012, was the first ever meeting of medical societies in the country on the AMR issue

https://www.bundesgesundheitsministerium.de/.../3.../Interim_Report_2016_EN.pdf
1 May 2016 - Global Action Plan on Antimicrobial Resistance – to have national action ... (GHSA)4 AMR Action Package, Germany is cooperating with other …
The German Antimicrobial Resistance Strategy (DART 2020)1 was adopted by the Federal Cabinet in May 2015. The aim of DART 2020 is to slow the development and spread of antimicrobial resistances in human and veterinary medicine. DART 2020 and the measures it contains adopt a stringent "One-Health" approach. The issue of resistance and the specific problems in the field of human and veterinary medicine are viewed and tackled in their entirety. DART 2020 brings together the various stakeholders with their differing areas of expertise and utilises the added value resulting from this cooperation. Important elements in this regard include raising the awareness of the population and medical professionals as well as improving rational antibiotic therapy and reducing the overall use of antibiotics.

>USAID helps Vietnam launch its National Action Plan for management of antibiotic use and control of antibiotic resistance in livestock production and aquaculture 2017-2020. 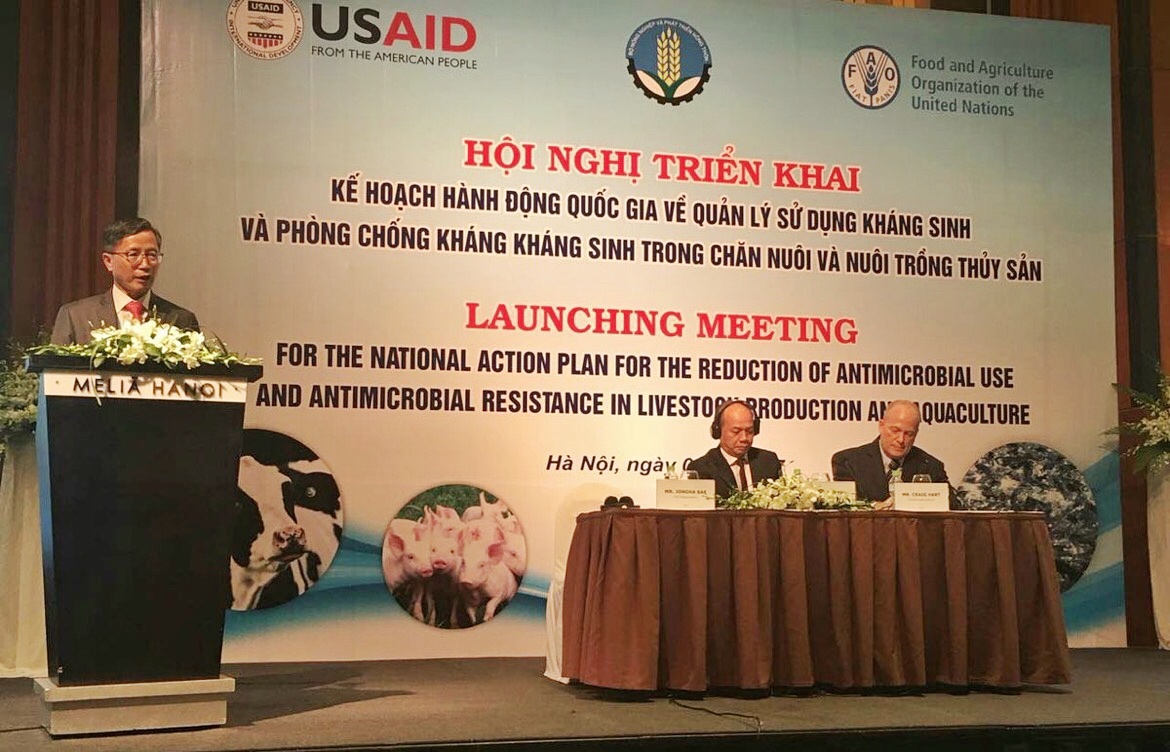 The Ministry of Agriculture and Rural Development (MARD) launches the Viet Nam National Action Plan for management of antibiotic use (AMU) and control of antibiotic resistance (AMR) in livestock production and aquaculture 2017 – 2020. With financial support from the United States Agency for International Development (USAID), this plan was developed in collaboration with the Food and Agriculture Organization of the United Nations (FAO) to guide the actions of the agriculture sector, governed by agencies under the Ministry of Agriculture and Rural Development (MARD), and complement the Ministry of Health national action plan on combating drug resistance in the period from 2013 – 2020. The implementation of this National Action Plan will help mitigate the public health risk of AMR arising from antibiotic usage in livestock production and aquaculture in Viet Nam.

“Launching a National Action Plan is a very important step, but its success depends on effective implementation, on compliance, and when necessary on enforcement. Actions must be based on the best evidence, consistent with international practices,” said Mr. Craig Hart, Deputy Mission Director of the United States Agency for International Development.